By requesting any of the described seeds  below you are agreeing that any seeds that you receive from liseed.org are to be used for experimental purposes only.  Most of the seed we distribute or produce is derived from mass crosses, segregating F2 hybrids or are seed mixes and unstable breeding lines which are primarily of interest to the backyard seed breeder and garden experimenter who wants access to a larger gene pool. We do exchange seeds with other breeders. Contact us.

If you recognize a problem with the germination or performance of the seed please let us know immediately. All of our seed is untreated.  Use the link to "Ordering" from the Home Page to request seed and make payment by PayPal.

Genus: Allium
Hardy/Half hardy biennial. Allium seed should be sown early indoors and transplanted into the garden in spring. They are slow growers initially and do not compete well with weeds. Most alliums are tolerant of a light frost. Leek and some scallions can over-winter (with protection in severe winter climates) to provide seeds the following year. Some scallions are perennial/dividing kinds and can produce multiple seed crops. While some bulbing onions can survive mild winters mulched, most should be over-wintered in a frost-free location (but cold) to be replanted in the next spring. Leeks can be root-cellared. Flowers are insect pollinated so crossing within the same allium species can be rampant without isolation. We continue to work with bulb onions which is a major crop for us. 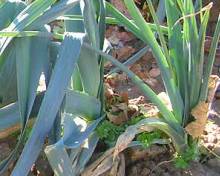 MULTILINE CROSS-LI Hardy Leek Blend
We searched for leeks in Europe and found many distinct older cultivars. We planted these and wintered the hardiest over in the field then allowed them to cross. Some of these are rapid growers and just great for summer greens; all are nice winter storage varieties. There is quite a bit of diversity here. Long white shanks are blanched when hilled or mulched as they grow in the field. Included is St. Victor and it's crosses that will develop a purple tinge to the foliage in cold weather. You may find some oddities as we do; those leeks that produce especiallly large and tender bulbs at the base (like elephant garlic) and an occasional leek that produces a mix of flowers and bulbils on the flower head. When we have more time both of these would be nice to isolate. (150 seeds) 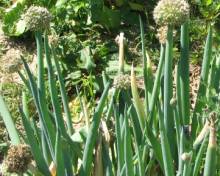 BLEND-Long Island Scallion Mix
Mixture of green onions or scallions. Summer kinds as well as perennials that have proven very winter hardy. Some may reseed for you, some will keep dividing. Some are simply the "greens" of milder bulbing varieties. From our production.  Not too diverse. We are hoping that some new kinds we have in the field will overwinter to produce more diversity in this mix for fall 2010.  (200 seeds)


Bulb Onion Mix
Seeds from our bank of onion cultivars; many colors, sizes, hard and soft kinds, the emphasis on varieties suited for polar of 35° latitude although some day neutral types are here, only for experimentation. (200 seeds)

Annual. Some species self sow. Establish seedbeds by lightly scattering seed in full sun in spring or plant out seedlings in early summer. Keep soil moist until the young seedlings are up and established. After that they can tolerate dry conditions. Seeds will germinate when soil temperature is 60°F. Wind and also insect pollination. Hybridization is well known but usually maintains it's integrity as a species. Likes warmth. Cut seed-heads when seeds are full and mature, lay on tarp in protected, dry area and allow to shatter. We use screens and a breezy day to remove chaff from seed.

Amaranth Spinach aka tampala, hon-toi-moi, chinese spinach (Usually A. tricolor, A. lividus, A. gangeticus, A. creuntus and hybrids) 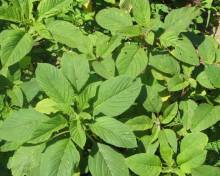 BLEND- LI Amaranth Leaf Mix
We have a half dozen kinds mostly from tropical asia; use the young shoots and pinch back for successive new growth. (300 seeds).

Amaranth Grain (A. hypochondriacus, A. cruentus, A. edulis , A. caudatus and hybrids) 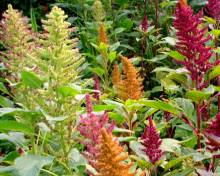 BLEND- LI Amaranth Grain Mix
Some of the variations you will find in this blend will allow you to select for your own particular requirements.  The principle grain crop of the Aztecs, it has outstanding nutritional qualities.  These are all white seeded types and produce great quantities of grain given good growing conditions. Try popping some seed to serve with honey.&nbsp; Some gardeners will grow these as a background plant in flower beds because of the beauty of their large and sometimes colorful inflorescence.  We enjoy the ornamental value as well as the edible quality as we work with this group. Many kinds including ancient cultivars.  (150 seeds)

Celery is a Hardy/Half hardy biennial. Sow the seed early indoors and transfer the plants out in spring. Slow growers at first, they require care. Celery enjoys rich, moist soils. They are tolerant of a light frost and can be over-wintered with protection such as mulching or earth mounding or may be stored in the root cellar. They will produce small flowers in small umbellate clusters and copious seed. An easy seed crop. Insect pollinated, all celery will cross with one another.

BLEND- Blanching Celery (Stalk Kinds) Mixed- usually hilled and blanched for tender stalks. Requires care in starting seed and a long period of growth until the plant becomes more resiliant. In a future project we will be crossing herb celery with salad celery for better home garden varieties. (100 seeds).

BLEND-Herb Celery Mix
Bushy plants resemble parsley. A multitude of long medium sized stalks and many large leaves characterize this group used for their aromatic leaves in soups and flavorful seed when wintered over as a biennial.  They have mild, chewy stalks which are fine diced and used in salads like stalk celery. The leaves like parsley can be minced and added to fresh salads as well. Much easier to grow compared to stalk celery. We will be working with this group a lot in the future. European and asian cutting celerys are included in this mix. Next year we hope to be able to provide crosses.  (100 seeds)


BLEND- Root Celery (Celeriac) Mix- used for the solid root which is sliced and boiled, roasted with other root vegetables or grated to use fresh. (100 seeds)

Genus: Daucus
Carrot (Daucus carota) Hardy biennial. Sow in the spring in the open ground. Tolerant of frosts. Roots can be harvested and root cellared for replanting and seed crops or left in the ground and mulched depending on climate to produce seed the next year. Insect pollinated. Easily crosses with wild carrot (D. carota) which will reduce root quality.

BLEND- Orange Carrot Standards
World's best carrots, orange color, some variety of shapes, variable adaption to soil types and climate fresh eating, summer and fall harvest, some winter storage kinds. Many different strains of Danvers, Nantes, Chantenay, Kuroda, Oxheart and more.  Select your best roots to over-winter and plant out for seed the second year. This is the diversity you need to find the best performing type for your soil and growing conditions. I am surprised to see young carrot seedlings as microgreens used to flavor salads. (400 seeds)

MULTILINE CROSS-  Long Island Early Color Mix
The objective of our breeding project was to cross many kinds of colorful carrots with the sweetest early maturing Nantes snacking types. This simple mass cross was quite a success and produced a dazzling display of snacking carrots that guests thought were quite tasty. We still have some seed from the initial mass cross and the F2 generation will be available in 2011. (200 seeds)


Genus: Foeniculum
Fennel is a hardy biennial or perennial which will produce seed the first season if planted early.

BLEND- Fennel Cross
We have worked with the varieties from southern Europe which produce inflated leaf stem (petiole) bases sometimes improperly called "bulbs" which are sliced and used raw or cooked as one might use carrot strips. This year we allowed them to cross with our reseeding bed of herb fennel, which produce green, gray and bronze lacy foliage used to flavor greek dishes,sauces, and soups.  There should be a lot of diversity here. Produced on Flanders Bay Farm.(100 seeds)

HERB- Dill (CV- Long Island Mammoth)
Dill is a fast grower, it's feathery leaves are used to flavor dill butter and added to salads, dips, baked fish and more, seeds known best for the flavor imparted to pickles.  We could not abstain to offer the genuine Mammoth Dill which can indeed grow to several feet in height.  Long Island was one of the largest pickling centers in America in the 1800's when hundreds of acres of cucumbers were brined and dilled, then sent to markets in New York City and Boston.  There was the last of the large "pickle works" still operating in Farmingdale when I was still a kid and I remember the wonderful aroma of dill and vinegar that greeted you when you walked into the huge wooden warehouse where the barrels of curing cukes were stacked high.  There have been reports that fennel and dill are so closely related that they are capable of hybridizing.  I haven't seen that. LI Mammoth Dill is an easy seed crop for the home gardener or farm.  (150 seeds)

BLEND- Globe Artichoke Mix- as a service for breeders we have this blend from our seed bank; our climate doesn't permit us to do work with the artichokes (40 seeds)

BLEND- Cardoon Mix- as a service for breeders we have this blend from our seed bank; our climate doesn't permit us to do work with this group (40 seeds)

Lettuce (Lactuca sativa) Half Hardy Annual. Sow in the spring, tolerates light frost, transplants well. Bolts first year, produces an easy seed crop. I don''t find a lot of crossing but I'm sure it can. 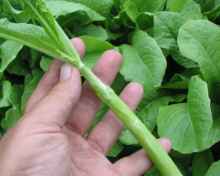 CV- Asparagus Lettuce (Celtuce)
Similar to Yu Mai with wider leaves and a stalk that becomes taller and thicker and can be sripped of lower leaves, peeled and eaten as a wonderful crispy salad treat. (100 seeds) 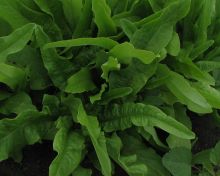 CV- Yu Mai Mix (Sword Lettuce)
The plants resemble the head of a palm with so many narrow, long sword-like leaves emerging from the low central crunchy stalk.  We find these little lettuces mild and long lasting. There may also be wider leaved Asparagus kinds in this mix (100 seeds) 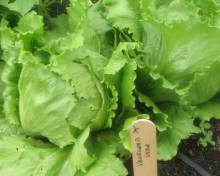 CV- Vanguard 75
Developed by USDA-Salinas, we received our start from NOFA-NY who distributed it as a variety to evaluate for organic systems as part of the Organic Seed Partnership.  We've now grown two different strains which are both very similar.  Over the past three years we've raised enough seed to make it available to others. It easily forms big leafy bright green heads but needs irrigation on our sandy soils for the best performance. A good Iceberg for organic gardeners which has not shown disease or insect damage in the field.  (100 seeds)

HEIRLOOM-  Tom Thumb
We enjoy these fit in your palm-sized single serving size instant salads. Soft heads known for their buttery goodness and a crispy heart are desirable traits as well as the ease of producing a good crop. Kids love to make their own salads from the tiny heads. Although seed is readily available, we produce our own quality seed since it's so easy to do.  A nice sustainable variety for us.  (200 seeds)