This work including original photographs may be transmitted or stored in electronic form on any computer attached to the Internet or World Wide Web so long as credit is given to liseed.org and is included in the copy. Individuals may make single copies for their own use. All other rights are reserved.

<>Some New Sweet Corn Projects:  Taking something great and making it your own!

Alan Kapuler, the legendary breeder from Oregon developed the beautiful Rainbow Inca Sweet Corn.  Many of his developments are so unique that they have inspired other breeders like me. Take something great, and with a slight twist you've made it your own. You can't lose when you start with great genetics.  Because of Mushroom's (or Shroom's) great committment to the free exchange of genetics, I don't figure he would mind if I do the same to produce an updated variation of his Rainbow Inca well suited for the Long Island palate.  I selected just the red and blue kernels from Rainbow Sweet and grew them in alternating rows with large kernel sweet corns which are proven performers for us.  Iochief is one of our favorite hybrid "su" corns and one that we selected to intercrop.  It's been around for long enough to be considered a mainstream commercial variety and is still being produced for farmers.  We also found a white homozygous 'se' type with larger that normal kernels and similar shape to Inca Sweet kernels.  Corn does benefit by hybridization even if just "on occassion".  A little diversity goes a long way in Sweet Corn.  We saw almost immediate results of the cross in the ears we picked this summer.  A nice blending of all colors, sweetness and texture.  Next year we expect even greater things when we plant the F1 seed. Save the seed of a hybrid. "Am I crazy?", you say. Sure, crazy like a fox. If I've learned one thing from the great breeders, it's to take chances. Go the distance.

Seeds of Change, the seed company that Alan was part of in it's formative years was influenced by his interest in open-polllinated seeds and organic cultural practices and still market the colorful open-pollinated Rainbow Inca Sweet Corn.   Home gardeners and organic farmers have been well served by his  work.

His own Peace Seeds is less commercial and more personal and offers a way for Alan to get people thinking about their relation to plants and the relationships between living things:  Seeds are Atoms.  Reading a Peace Seed Catalog and the Peace Seed Journals, on occassion is a bit like reading the label of Dr. Bronner's Peppermint Soap with Pure Hemp Oil.  But instead of preachiness (ALL-ONE!), there is a scholarliness which allows us to understand the science of those connections and kinships that are most important. My well-worn copy of Alan's 1991 seed catalog is a treasure. The covers pull together the work that Alan and Olaf Brentmar did on the coevolutionary structure of the plant kingdom (published in the Peace Seed Journals through the 1980's). The "kinship diagrams" are based on Rolf Dahlgren's modern classification of plants. The diagrams are visually beautiful in the way that relationships between plant families are so well shown by their "groupings". I started teaching Botany in 1991 and I don't know how many students have benefitted by understanding plant families on the basis of Alan's work. 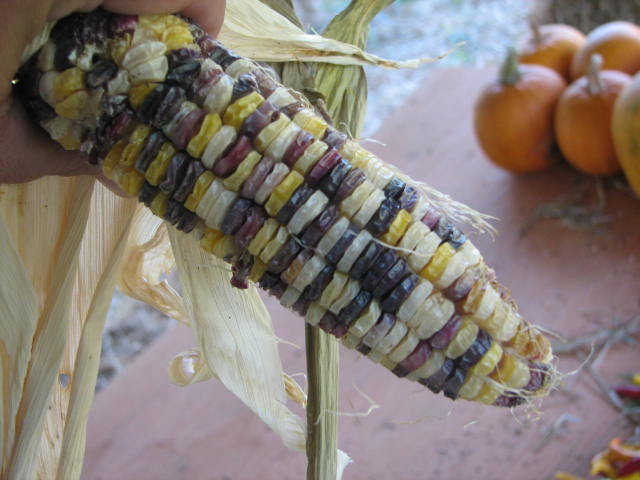 Rainbow Inca cobs are especially good for roasting on the barbecue when mature and reaching the pretty color stage.  Use other corns for cooking in the kettle and sweeter taste.  Later, as the husks dry and brown, the kernels of the Inca like all sweet corn will shrivel a bit and can be dried for seed that can be ground into meal, rehydrated in stews or saved for planting.
<>The Revisited Rainbow Inca, like the original is truly an art.  Look at those big kernels.  Not just a sweet corn but a corn that gives tribute to the past and diversity of maiz in every wonderful, smoky bite.  Get a copy of the Peace Seed Catalog.  Alan's plant developments and introductions are truly inspired.

Fred Ashworth was a farmer and nurseryman who established the St. Lawrence Nursery in Potsdam in northernmost New York and worked for nearly 50 years improving and developing fruit and nut varieties.  The lake effect snows and short growing season was just the catalyst that made it necessary for Fred to breed farm adaped varieties where none were available.

Among his many achievemens, his mass cross of corns selected from many short season types bears his name and has endured over 30 years thanks to seed savers who have discovered the  virtues of Ashworth Sweet Corn.  Fred said that the corn had been selected by mice who visited his seed stock squirreling away the sweetest which he planted.

It's sometimes hard to believe that corn on the cob is not enjoyed in Europe like it is in the U.S.  The reason is that in part,  much of Europe is a lot like Potsdam. N.Y. and climatic factors make it difficut to grow the typical heat loving corn.   It is particularly in northern Europe where Ashworth is gaining popularity.   Here on Long Island we can grow sweet corn (and do we ever) including the late varieties with their large cobs and many row of kernels like Stowell's Evergreen.   Bi-color sweet corn is probably the number one selling product at local farmstands in August and September.

You don't see the yellow kerneled Ashworth Sweet Corn much on Long Island.  Most folks might not see the need to grow it but Ashworth is my earliest corn and it has a special place in my garden since I can harvest it by July 4.  Growing up, we had a saying, that corn had to be knee high by the 4th of July.  Ashworth certainly does one better.  Corn in 60 days or less.  Many Long Islander farmers do grow early corn but often with fungicide seed treatment and hit or miss germination.  No need with Ashworth.  And it's frugal stalks, only a bit more than 3 or 4 feet high aren't the big nitrogen consumers that take their toll on the soil.

Ashworth is an 'su' corn like Golden Bantam and most of the sweet corns were until the 1970's.  This year I decided to sow Ashworth Sweet later and intercrop it with a mix of modern homozygous 'se' corns.  I enjoy the extra sweetness of these corns as well as the ability to stay sweeter longer after harvest instead of rapidly converting their sugars to starch as most 'su' types do.  But I enjoy the rich corniness of Ashworth (maybe because I grew up eating the classic 'su' corns) and the substance of the kernels.

The results were fast.  Pollination allowed some of the 'se' characters like sweetness to be transferred to the Ashworth just by virtue of being grown together.  You don't even have to save the seed.  Ashworth was noticably sweeter but then the 'se' corn was also affected by the Ashworth 'su' pollen but not that I could tell in my taste tests.

When the husks dry brown harvest the cobs for seed.  We allow the seed to cure on the cob for a few weeks before twisting the kernels off the cob for seed saving.